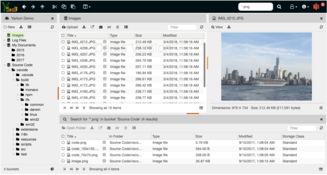 Version 4.0 of Yarkon Cloud is now officially available from the AWS Marketplace and for sign up from this site.

This is the first major release in a year, and includes a full refresh of the user interface, as well as numerous enhancements.

What is in the new release?

The original Yarkon user interface was based on Windows Explorer, and has remained practically unchanged for the last three years. After conducting a thorough market research, we realized that the time to revisit and improve the UI has come.

The changes were made following these recommendations: